A 42-year-old healthcare worker in Hyderabad died on Wednesday, a day after he was inoculated with the anti-coronavirus vaccine. However, the Telangana government said it was not linked to the vaccine shot, even as the postmortem of the deceased is yet to be conducted.

Telangana’s Director of Public Health and Welfare said the male worker was vaccinated on January 19 in Kuntala PHC, Nirmal District of Hyderabad. A day later, he developed chest pain and was brought dead to District Hospital, Nirmal at around 5:30 am.

“Preliminary findings suggest that the dead seems to be unrelated to the vaccination. As per the guidelines, postmortem will be conducted by a team of doctors,” a statement issued by the Director of Public Health and Welfare read.

The statement further said that the district Adverse Events Following Immunisation (AEFI) committee will submit its report to the state AEFI committee, which will further brief the Centre. 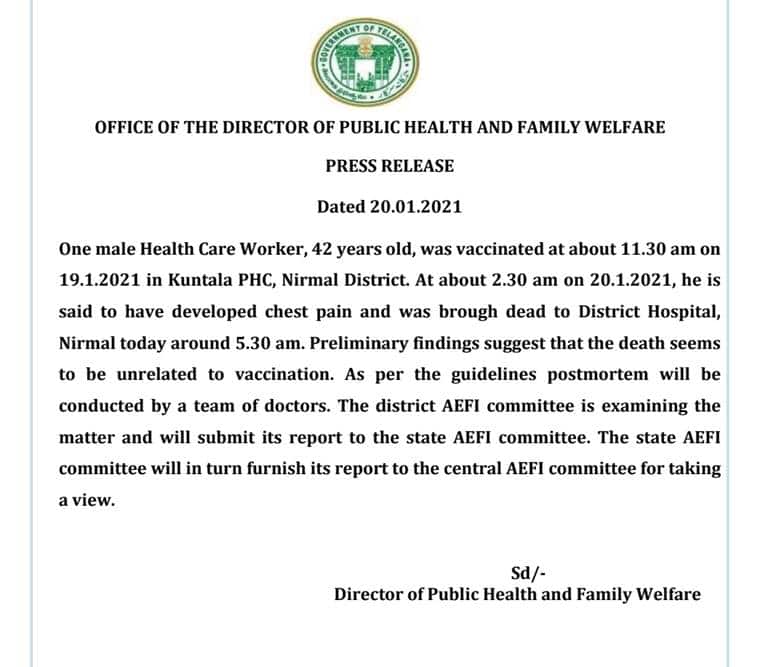 The statement issued by Director of Public Health and Welfare.

This is the third incident of a healthcare worker dying after getting vaccine shots. In both cases, the Union Health Ministry has denied that the deaths could be attributed to the severe adverse events following immunisation. The nationwide vaccine drive, which was kickstarted on January 16 by Prime Minister Narendra Modi, aims to inoculate over three crore healthcare and frontline workers before it is made available for the general public.

In the first two cases, Mahipal Singh, a 52-year-old who worked as a wardboy in a government hospital in Moradabad, died on Sunday, a day after he was vaccinated. The post-mortem procedure in the second case — that of 43-year-old Nagaraju, an employee of the state health department in Bellary, Karnataka, who died on Monday, two days after getting the vaccine — was being done.

BSEH prepared to conduct Class 10, 12 board exams in Haryana, awaits nod from the government

Centre asks states to make rational use of medical oxygen, ensure no wastage